This story comes from the island of Bali, Indonesia. It is about Bawang. Her name means 'red onion'. She is ver weet-tempered, and red onions are sweet, so that is how she got her name. 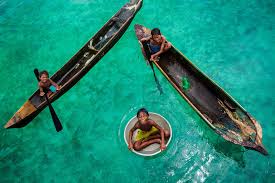 Every wash-day Bawang went down to the river with a basket of clother. One day, as usual, she bathed herself in the fastflowing water, then reached for a sarong to wash. But the basket has disappered!

"Oh no!" gasped poor Bawang. "Mother will be so cross if I have los all our clothes."

Bawang realized she must have placed the basket too near the water's edge and that it had tipped in, so she ran downstream as fast as her feet would carr her, to see if she could find it.

Bawang ran and ra, but still she could not see the Basket. Tired out, She stopped to catch her brfeath. Two fish popped their heads out of the water to see who was puffing and panting so.

"Oh, fish, have you ween my basket of clothes in the river?" she asked.

"No sister, we have not ween your basket," the fish replied.

Bawang ran on, tears running down her cheeks. She saw some frogs sitting on the river bank.

"Oh frogs," sobbed Bawang, "have you seen my basket of clother float by?"

"We regret, sister, that we have ween no basket of clothes, " croaked the frogs.

Bawang ran on further until she saw some crabs sunning themselves by the water.

"Oh, good crabs, please, you must have seen my basket of clothes passing by on the river?"

"No," replied the crabs."We have not seen your clothes; but don't cry so, it's not such a loss. We don't need clothes."

From Folk Tales of the World retold by Gini Wade

A Tale: The Rats and their Daughter (Segunda Parte) "You are wrong, if you think that I am the mightiest," said the Cloud. "It's true that I can cover the earth, but I'm quite weak when the Wind blows upon me. He drives me along and tears me to pieces, and I can do nothing against him."

So Mr. and Mrs. Rat went to the Wind.

But the Wind said:

"Yes, I am mightier than the Cloud. But I am not the mightiest in the world; for the Wall is sometimes in my way, and I blow and blow, but the Wall is still there and I cannot pass through it."

Again Mr. and Mrs. Rat went on, until they came to the Wall. But the Wall said:

"You are right,  I can indeed hold back the Wind, I am mightier than he. But there's the Rat, who makes holes in me and I can do nothing agains him. The best thing for you todo es to choose the Rat for your son-in-low!"

Then Mr. and Mrs. Rat were happy, for they saw that the Wall spoke words of wisdom. They went home again, and their beautiful daughter married a handsome RatK and they lived happily for many, many years.

Who knows? Perhaps they are still alive.

A Tale: The Rats and their Daughter (Primera Parte)

Once upon a time there were two mos respectable Rats. The Rats' home was comfortable and they had many fine children; but the one they loved most was their youngest daughter.

She was a lovely little rat; she had the smoothest grey coat, and the brightest little eyes, and such dear little ears! If you looked at her, you were sure that you had never seen anything so beautiful in your life. At least that is waht her own parents said.

When she was old enough to marry, they became very serious.

"She must have no ordinary husband, "they said. " He mus be  very mighty indeed. No one but the misghtiest in the world shall marry our beautiful daughter."

But who was the mightiest? It was not easy to tell, and they didn't know. So they went to a very old and wise Rat, and asked him. His answer was:

"If you wish to give your daughtr to the mightiest of all, then go to the Sun, and ask him to be your son-in-law. I am sure no one es mightier than the Su."

So Mr and Mrs. Rat went to the Sun (it's rather a long way), and asked him to marry their daughter. But the Sun replied:

"I'm much obliged to yo for coming all this way and offering me your dearly beloved daughter for a wife; but please tell me, why did you choose me?"

"We chose you, because we wished to give her to the mightiest in the whole world; and of course no one can be mightier than you".

"I see" said the Sun;"but I'm afraid you are wrong there's one mightier than I am, and you must give your daughter to him."

"Who can be mightier than you?" asked Mr rat; and the Sun made reply:

"When I wish to shine on the earth, a Cloud often comes along and covers it, and my light can't (can not) pass through it or drive it away. You must go to the Cloud."

So Mr. and Mrs. Rat went to the Cloud and told him their wish.